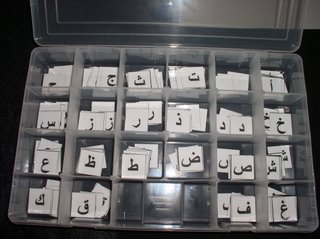 I just recently finished another Arabic Project: the Arabic Moveable Alphabet. Like the Sandpaper Letters, this project is based on the Montessori Method for English.

To prepare for spelling, writing and reading.
MATERIALS NEEDED:

A large box with spaces for letters of the alphabet. The boxes contain several copies of the letters cut out from stiff, thin, cardboard or plastic reinforce paper. I ended up using cardstock and then laminated and cut them.

Floor activity- spread a large rug for the work area. You open the moveable alphabet box and show the letters to the child. You make sure that the child knows where the letters are in the box. Ask to find various letters, such as, “Can you show me “alif”? and so on.

After the child has a grasp of where the letters are you begin by saying, now we will make _______. For example, the word “arnab.”Ask, “What letters do you hear when I say “arnab”? The child finds the first letter and puts it on the mat. Ask, “what other sounds do you hear?” S-l-o-w-l-y and clearly enunciate the word for the child. Continue until your child finds all the letters of the word. Mind you, in the initial version, your child will just be putting the letters out for the word (you do not use the letters printed out for joining yet if that makes sense). You just want to help your child develop a sense of what letters are used in the word based on what they hear and to develop a familiarity with the letters. Once that is accomplished, then you can use the moveable alphabet that includes joining letters (beginning, middle, and end). I hope this makes sense.

Continue to make words with your child until the exercise is mastered.Eventually, your child will be able to work alone.

Note: Make sure you use letters that your child knows. Also, continue to work on the phonetic sounds of the alphabet.

I would suggest starting with words that have few letters at first and then work your way up to more letters.

One thing to mention is that it is not a fun task to go hunting for these containers to put the letters in – you either find containers that are too big or those that are too small. I found a tacklebox set at Wal-Mart (under $10) that was perfect – it has four boxes (please see picture below). 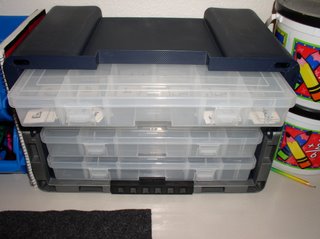 I’m intending to use two boxes for the English letters (capital and lower case letters). The other two boxes will be used for Arabic. Right now, I have only used one box for the Arabic letters in their normal form. When my daughter is ready to move onto the letters in their other forms (at the begging, ending and middle of words) I will make cards for these as well, insha’Allah.

I am intending to upload a template for all the Arabic letters and directions on how to make the Moveable Alphabet. Here are the files you will need:

Insha’Allah this inspires you to make your own learning materials!