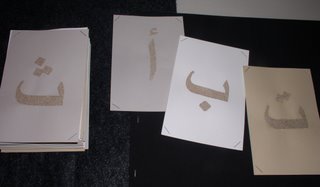 I finally finished my long-awaited project: Arabic Sandpaper Letters (for a larger picture, click on the image above). It took me quite a long time because I have carpal-tunnel in both hands so it slowed me down quite a bit (yes, you have to cut out all of the shapes of the letters!) and this added to my laziness!

First of all, I must admit this was not my original idea. It is based on the Montessori Method for the English Alphabet and is adapted for Arabic. Also, I found an actual sample of this on an Islamic Montessori Group on Yahoo but they didn’t provide any templates or anything – just a picture. If you are interested, here is the group location (but they haven’t been active for quite some time now):

Anyway, I thought I’d share a little bit about what you can do with Sandpaper Letters.

To learn the sound and shapes of the Arabic Alphabet. You can help your child mimic the act of writing the letter (feeling the sandpaper in the proper hand movements) as a prelude to writing.

With the sandpaper letters, you can introduce the phonetic sounds to the child. In the Montessori approach, the sounds of the letters are taught before the child is introduced to the names of the letters. Research has shown that it is best to learn one thing at a time. It is too much to have to remember both names and sounds. If the child is taught both the names and the sounds in the beginning, it has been found that the child gets confused when trying to sound out a word because it is difficult to remember which the letter represents. Therefore, to avoid the added difficulty, the phonetic sound of each letter is taught first, and the names of the letters are taught later.

The teaching of the sounds and letters is through a multi-sensory approach. The child will hear the sound, see its representation in the form of a letter, and feel the way it is written as the child feels the letter with his fingers. Since a motor pattern should be learned correctly the first time, it is very important that the child trace properly formed letters. This will help him develop a good pattern for handwriting.

What about the vowels?

As for vowels, I will do as I have seen the Islamic Montessori Group do in their suggestion – they simply made a cover that is the same size as the card out of heavy plastic (perhaps a transparency) and put on that plastic card the vowel marks. When you want to introduce the letters with vowel marks, just place the plastic card over the letter card. When I make them, I will show you a picture (but since we are just now going to focus on the letters I will skip that for now).

I am intending to upload a template for all the Arabic letters and directions on how to make the Sandpaper Letters. Here are the files you will need:

Insha’Allah this inspires you to make your own learning materials!